PARTNERSHIPS WITH PUBLIC AND PRIVATE ORGANIZATIONS

Sectoral coordination In the framework of improving public intervention in the field of Moroccans living abroad and migration, the Ministry has undertaken a set of provisions, namely, i) strengthening cooperation and partnership with the various ministerial departments and public institutions, as well as civil society, in order to coordinate on a series of questions and problems encountered by Moroccans around the world in various fields and find them solutions, and ii) the exploitation of conventional potential of the Ministry with all public and private organizations and institutions.

At this level, it is a question of monitoring the implementation of measures concerning the various sectors which will make it possible to improve the situation of Moroccans living abroad to ensure convergence between the various public policies. This component also consists in contributing to the support of the development of sectoral policies and participating in their concretization through questions which concern the attributions of the sector, such as the Integrated National Youth Strategy (2015-2030), the National employment strategy (2015-2025), the government plan for equality Ikram1 and Ikram 2, and integrated public policy for the protection of children in Morocco. Finally, this action aims to monitor and contribute to the work of the various international mechanisms, in particular those relating to human rights and dealing with the concerns of the Ministry.

All its actions are reinforced by the mobilization of available expertise and the carrying out of studies in the field, in order to be able to act in full knowledge of the facts and take the appropriate decisions.

Operation Marhaba occupies a central place among the concerns of the Kingdom. It constitutes a model at the international level, whether in terms of the resources mobilized or the far-reaching measures that have been taken to ensure successful transit in both directions, of a flow of more than 5.4 million MRE for a period three months in summer. This large number of MREs who return to Morocco in summer testifies to the unwavering attachment of Moroccans around the world to their mother country.

It is in this sense that the operation has grown in importance over the years under the effective presidency of His Majesty King Mohammed VI that God glorify him and the effective coordination of the Mohammed V Foundation for Solidarity. The efforts and the central role of the Foundation in terms of reception and assistance and proximity to MREs during their transit are to be commended.

OBJECTIVE OF THE OPERATION

The overall objective of Operation Marhaba is to improve the transit and stay of MREs during their temporary return to Morocco during the summer holidays. Its main specific objectives are:

Ensure the transit, under good conditions, of Moroccans residing abroad between the host countries and Morocco;

Supporting the MRE’s stay in Morocco during the summer, through quality reception and local services.

Orientation of Her Majesty during several speeches namely:

Speech on the occasion of the celebration of the 30th anniversary of the green march, November 6, 2005.

The 5th axis of the government program 2017-2021 reserved for the preservation of the cultural and worship identity of the Moroccan community abroad.

The main partners of the operation are:

IMPLEMENTATION OF THE OPERATION

The operation generally starts at the beginning of June each year and ends in September. In 2019 as in previous years, it started, under the effective presidency of His Majesty King Mohammed VI May God Glorify it, on June 05 and ended September 15. In this sense, a series of measures is taken on several levels:

At the organizational level:
The national transit commission, chaired by the Ministry of the Interior, coordinates this operation throughout the year, in a spirit of partnership and commitment, to prepare and evaluate the system put in place by all stakeholders. Coordination meetings are organized, both before the operation to finalize the organizational arrangements to be put in place, and after the operation is completed to make an overall assessment of its progress.

At the same time, Morocco and Spain are coordinating their actions to prepare a system based on three essential components:

Transport level:
Transport is a central axis of Operation Marhaba. At the maritime level, this component represents nearly 42% of flows during the operation. The fleet plan, made up of 27 vessels connecting the Moroccan and Spanish ports, ensures an average daily capacity of 60,000 passengers, thanks to the mobilization of the efforts of all stakeholders. In addition, in addition to these mobilized efforts, a ship mobilizes annually since operation 2015, by Morocco in a multi-partner framework, to intervene during peak periods. Also, significant financial efforts have been made for port redevelopments and the improvement of passenger services at the various ports of the Kingdom.

In terms of air, an important system is in place to ensure better comfort conditions and guarantee all security conditions for travelers. As part of its program, the national company RAM has widened its transport system by strengthening the frequency of flights and the transport capacity, through the opening of new destinations and the operation of certain lines by additional flights. .

In terms of land transport, regular lines have been set up and managed by both foreign and Moroccan companies. Also, a guide on officially approved road transport companies has been developed and made available to MREs.

In terms of support and security
Each year, the operation experiences an increase in human and material resources at border posts equipped with electronic detection equipment and scanners, in addition to the reinforcement of human resources of the Directorate General of National Security,

Auxiliary Forces and the Royal Gendarmerie.

The central role of the Mohammed V Foundation for Solidarity is confirmed from year to year, by setting up an important multifaceted assistance system for reception areas in Morocco and abroad and by making available to specialized human resources, in particular social workers, doctors, nurses and paramedics. The Foundation has also implemented a unified Marhaba Brochure: multi-information.

Arrangements made by The MCMREAM
Each year, the MCMREAM prepares a support system during the summer stay of MREs. This device concerns:

The reception and orientation of MREs in coordination with other relevant administrations and institutions;
Communication which aims to provide all necessary and useful information to MREs;
The organization and participation of MREs in events of an economic, cultural, social and educational nature which make it possible to consolidate the ties of belonging of MREs with Morocco.

Reception and orientation:
Establishment of a permanence service within the Ministry, at the central level, but also at the territorial level, in the Maisons des MRE in Tiznit, Béni Mellal and Nador, in order to ensure the reception, orientation and communication with MREs, as well as coordination with local authorities to respond to grievances of MREs and their problems, particularly administrative and legal;
Establishment of a special window for MREs at the level of Moroccan administrations and public institutions experiencing a large influx of MREs. A circular was issued by the Head of Government in July 2015 for the establishment of this window, which was also renewed in 2016 and 2017.
Organization of information and awareness campaigns on the programs and services offered, in coordination with the administrations and organizations concerned. The objective of this campaign is to provide MREs with all the information they need during their stay at Tue 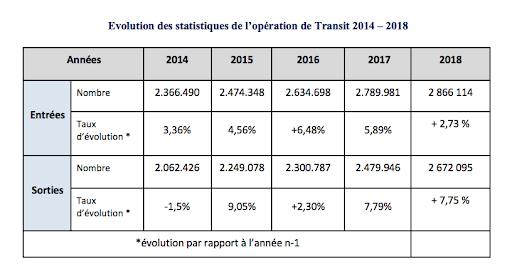