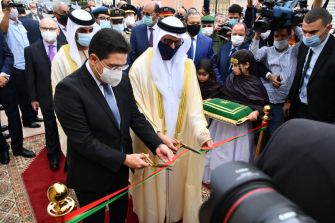 This inauguration comes after a phone call, which took place on the 27th of October, between His Majesty King Mohammed VI with His Highness Sheikh Mohammed Bin Zayed Al-Nahyane, who communicated his country’s decision to open a Consulate General in Laayoun.

His Majesty King Mohammed VI, May God assist Him, expressed via an official statement from the Royal Cabinet on this occasion, “His deep pride in the decision of the Emirates as the first Arab country to open a Consulate General in the southern provinces of the Kingdom”.

This historic decision by the United Arab Emirates, which took part to the Glorious Green March, is an affirmation of its support to the Kingdom’s territorial integrity and consolidates its position in the defense of Morocco’s legitimate rights and just cause.

With this opening, the total number of Consulates General of African and Arab countries inaugurated in Laayoun, since the end of last year, is brought to 9 whereas the city of Dakhla hosts 7 Consulates General.

The number of Consulates General in the southern provinces continues to increase, and is no longer limited to countries from the African continent, which is a sign of undeniable support to the Moroccan character of the Sahara, taking into account the timing that is just a few days before the 45th anniversary of the Green March.