Access to National Territory As of July 15, an ‘Exceptional’ Operation That Does Not Mean Opening Borders: FM 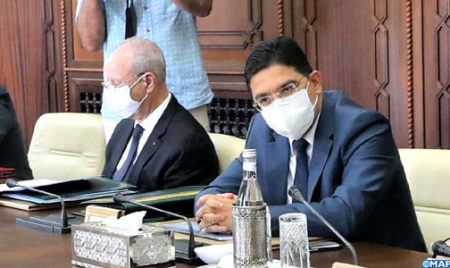 Rabat – The release issued by public authorities according to which Moroccan nationals and foreigners living in the Kingdom, as well as their family members, will be able to enter Morocco as of July 15 is an “exceptional” operation, said Minister of Foreign Affairs, African Cooperation and Moroccans abroad, Nasser Bourita, noting that this operation does not mean opening the borders of the Kingdom.

Speaking at the Government’s Council which was held on Thursday, Bourita stressed that this does not mean opening the air, land and sea borders of the Kingdom but it is rather an exceptional operation aimed at authorizing access to the national territory as of Wednesday, July 15, 2020, to Moroccan citizens regardless of their condition (stranded tourists, students or residents abroad), as well as foreigners living in the Kingdom who were abroad for whatever reason, as well as their family members.

According to Minister of National Education, Vocational Training, Higher Education and Scientific Research, Government’s spokesperson, Saaid Amzazi, Bourita said that the people concerned by this exceptional operation must respect some conditions: holding Moroccan nationality or a residence permit in Morocco for foreigners and presenting before boarding a PCR test of less than 48 hours, as well as a serological test, adding that upon arrival, anyone with symptoms related to the coronavirus disease must have additional tests.

For students newly admitted to foreign university institutions, businessmen and citizens forced to leave the national territory for medical care and foreigners living in Morocco, they must have an exceptional authorization issued by the competent parties, Bourita pointed out.

He also said that this operation will be carried out through the air crossing points essentially via flights of Royal Air Maroc and Air Arabia, as well as through the maritime crossing points via the programming of ferry boats, exclusively at the ports of Sète (in France) and Genoa (in Italy).