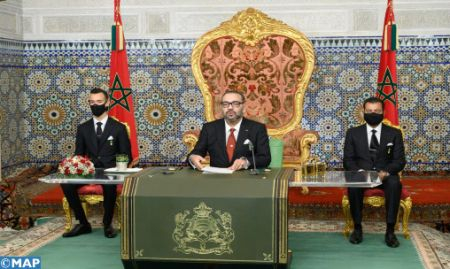 Rabat – HM King Mohammed VI delivered, on Saturday, a speech to the Nation on the occasion of the 45th anniversary of the Green March.

Here follows the full text of the Royal speech:

“Praise be to God,

May peace and blessings be upon the Prophet, His Kith and Kin

The Green March, the forty-fifth anniversary of which we are celebrating today, is a unique example of mobilization, discipline and the pursuit of what is just.

Indeed, Moroccans responded spontaneously and with a keen sense of sincere patriotism to the call of the architect of the Green March, my revered father His Majesty King Hassan II – God bless his soul.

Through a peaceful march, which enabled our country to recover its southern provinces, Moroccans proved to the world their ability to rise to challenges and make history.

The Green March is not simply a watershed in the completion of our territorial integrity. It is an ongoing process whereby we confirm the Moroccanness of the Sahara in the international arena, making its celebration a driver of economic growth at the regional and continental levels.

In recent years, there have been tangible developments on several fronts:

At the UN, the latest Security Council resolutions have laid to rest outdated, unrealistic approaches and proposals.

Those resolutions have also insisted on the actual participation of the real parties concerned in this regional conflict and have irreversibly endorsed the political solution based on realism and consensus as the path forward.

This policy is in line with the Moroccan Autonomy Initiative, which is backed by the Security Council and the influential powers as the sole normal course of action for the settlement of this dispute.

At the level of the African Union, and with Morocco’s return to its African family, this pan-African organization has freed itself from the manipulations it had been subjected to for years.

The African Union has now adopted a constructive stance, which consists in providing full support – through the UN Secretary-General and the Security Council – to the United Nations Organization as the sole institution in charge.

On the legal and diplomatic front, a number of sister nations have opened consulates general in the cities of Laayun and Dakhla, thereby explicitly and unequivocally recognizing the Moroccanness of the Sahara. They are, thus, attesting to the security, stability and prosperity enjoyed by the inhabitants of our southern provinces.

At the same time, the vast majority of the international community refuses to endorse the views peddled by the other parties. As a result, the number of countries which do not recognize the fictitious entity now stands at 163, or 85% of UN Member States.

This trend has been further bolstered by the adoption of constructive positions by the global powers through, for example, the conclusion of strategic and economic partnerships that incorporate – without exceptions or reservations – the Kingdom’s southern provinces, which are an indivisible part of the Moroccan territory.

Given the above, Morocco reiterates its sincere commitment to cooperate with His Excellency the Secretary-General of the United Nations, within the framework of the relevant Security Council resolutions so as to achieve a final solution based on the Autonomy Initiative.

Morocco will not waver in its position. Nor will it be affected, in any way, by the useless provocations and desperate schemes of the other parties, which attest to a headlong rush, now that their outdated claims have failed.

In this regard, we categorically reject the unacceptable practices designed to disrupt the normal flow of traffic between Morocco and Mauritania, change the legal and historical status of the territory east of the berm, or illegally exploit the region’s resources.

As ever, Morocco will not only continue to abide by and uphold logic and wisdom, but it will also respond, with the utmost firmness and resolve, to any practices or attempts designed to undermine the security and stability of its southern provinces.

I am confident the United Nations and MINURSO will continue to carry out their duties in terms of preserving the ceasefire in the region.

My commitment to reaffirming the Moroccanness of the Sahara is as steadfast as my endeavors to make the Sahara an engine of development at the regional and continental levels.

To complement the major projects implemented in our southern provinces, I think the time has come to exploit the region’s enormous maritime potential.

In this regard, Morocco has this year completed the demarcation of its maritime boundaries and incorporated them into its legislation, in keeping with international law.

Morocco will remain committed to dialogue with its neighbor, Spain, regarding any overlap between the territorial waters of the two friendly countries, consistent with the provisions of the Law of the Sea and in keeping with the spirit of their partnership, avoiding any unilateral decision or fait accompli.

The delineation of the maritime areas falling under the Kingdom’s sovereignty will support the plan designed to promote the current vibrant economic and social policy in the region.

Consistent with this vision, the Atlantic coast to the south of the Kingdom, bordering the Moroccan Sahara, will serve as an area for the achievement of economic complementarity as well as continental and international prominence.

In addition to Tanger-Med, which is the first port in Africa, Dakhla Atlantique will contribute to reaching this goal.

I shall continue to work for the development of a real maritime economy in these provinces, which I particularly cherish. Indeed, they boast significant resources and capabilities that can make them act as a bridge between Morocco and its African roots.

It is important, in this respect, to invest in marine areas, whether with regard to seawater desalination or renewable energy, exploiting, to this end, wind turbine generators and tidal energy.

In parallel, we must continue to develop the fishing sector, given its role in boosting the region’s economy. This would also give fresh impetus to the Plan Halieutis, making it a strategic pillar for revitalizing the tourism sector, turning the region into a prominent destination for beach tourism.

Loyalty to the spirit of the Green March and to its immutable oath requires all Moroccans to remain mobilized and vigilant and to work in a diligent, responsible way so as to rise to internal as well as external challenges.

We must all keep in mind the spirit of the Green March and the values underpinning that event in order to press ahead with economic and social development, defend our interests and our just causes and enhance Morocco’s status at the regional and international levels.

I wish to take this opportunity to remember Morocco’s brave martyrs, and to salute our Royal Armed Forces and our security agencies for being constantly mobilized, under my leadership, to defend the unity of our homeland and preserve its security and stability.