Moroccan Citizens and Foreign Residents in Kingdom, As Well As Their Families Could Enter National Territory As of July 14, 2020 at Midnight by Air and Sea, Press release of Moroccan Govt. 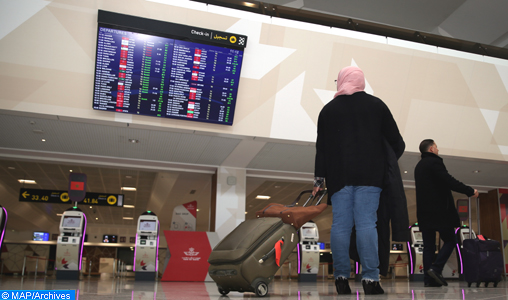 Rabat – Moroccan citizens and foreign residents of the Kingdom, as well as their families will be able to enter the national territory, as of July 14, 2020 at midnight by air and sea, announced on Wednesday a press release by the Moroccan government through the Ministry of Interior, the Ministry of Foreign Affairs, African Cooperation and Moroccans Abroad and the Ministry of Health.

The national airlines will schedule as many flights as necessary for the success of this operation, said the same source, adding that passengers will be required to present, before boarding, a PCR test of less than 48 hours, as well as a serological test.

The press release also noted that ferries will be programmed for this purpose, exclusively from the ports of Sète (in France) and Genoa (in Italy), to the exclusion of any other port, adding that the travelers of these ferries will be required to provide a PCR test of less than 48 hours and to comply with the recommended strict hygiene measures. A PCR check could possibly be carried out during the trip, according to the same source.

Moroccans residing abroad as well as foreigners residing in Morocco will be able to leave the Kingdom, at the end of their stay, by the same air and sea means, the statement concluded.