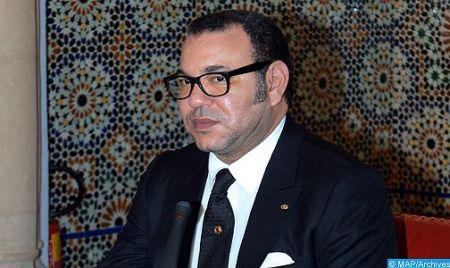 “HM King Mohammed VI had this Thursday a telephone conversation with His Excellency Mahmoud Abbas Abu Mazen, President of the Palestinian National Authority.

HM the King reaffirmed to His Excellency that the position of HM the King in support of the Palestinian cause remains unchanged, a position which the Sovereign inherited from His father the late HM King Hassan II, may God have His soul.

The Sovereign stressed that Morocco supports the two-state solution and that the negotiations between the Palestinian and Israeli parties are the only way to reach a final, lasting and comprehensive solution to this conflict.

In His capacity as Chairman of the Al-Quds Committee, an offshoot of the Organization of Islamic Cooperation, HM the King has never ceased to insist on the need to preserve the special status of the city of Al Quds Asharif and to respect the freedom to practice religious rites for followers of the three monotheistic religions, as well as the Muslim aspect of Al-Quds Asharif and the Al-Aqsa Mosque.

The Sovereign also stressed that Morocco has always placed the Palestinian question at the same level as the question of the Moroccan Sahara and that the Kingdom’s action to uphold its Moroccanness will never be done, neither today nor in the future, to the detriment of the struggle of the Palestinian people for their legitimate rights.

On this occasion, the Sovereign noted that the King of Morocco enjoys a special status and that He has distinguished relations with the Jewish community of Moroccan origin, including hundreds of thousands of Moroccan Jews living in Israel.

HM the King affirmed that Morocco will take advantage of all arrangements and contacts agreed upon between the Sovereign and the American President to promote peace in the region, and that this in no way affects the unwavering and continuous commitment to the defense of the just Palestinian cause.

HM the King stressed that Morocco, which places the Palestinian cause at the top of its concerns, will never renounce its role in the defense of the legitimate rights of the Palestinian people, and will remain, as it has always been, King, government, and people, by the side of our Palestinian brothers, and will continue his constructive commitment to achieve the establishment of a just and lasting peace in the Middle East region”.