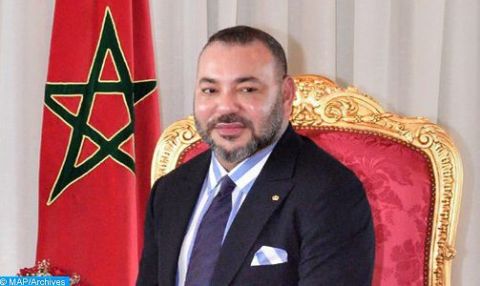 “His Majesty King Mohammed VI, may God assist him, had a telephone conversation today with His Excellency Mr. Donald Trump, President of the United States of America.

This meeting was an opportunity for the two Heads of State to discuss regional and international issues of common interest.

It was the occasion to announce the historic decision of the United States of America to recognize the full and entire Moroccanness of the Kingdom over its Sahara.

This decision is the result of intense consultations on the issue between the two Heads of State for several years.

President Trump promulgated on the same day a presidential decree, with all that this act entails as an undeniable legal and political force and with immediate effect, on the decision of the United States of America to recognize, for the first time in its history, the full sovereignty of the Kingdom of Morocco over the entire region of the Moroccan Sahara.

In this context, and as the first concrete expression of its sovereign initiative of great importance, the United States of America has decided to open a consulate in Dakhla, with a primarily economic vocation, to encourage U.S. investments and contribution to economic and social development, mainly for the benefit of the inhabitants of the southern provinces.

On this occasion, the Sovereign expressed, on his personal behalf and on that of all the Moroccan people, to the American President His deep gratitude to the United States of America for this historic position.

His Majesty the King also conveyed His sincere thanks to the U.S. President and his team for this frank and unambiguous support to the Moroccan Sahara. Such support strengthens the powerful strategic partnership between the two countries and raises it to the level of a true alliance that encompasses all fields.

His Majesty the King stressed that although the opportunity did not present itself to meet directly with His Excellency the President, consultations and coordination have continued, especially since the visit of His Excellency Mr. Jared Kushner, Special Advisor to His Excellency, in May 2018, which was decisive on various issues, including this topic; as well as through contacts, exchange of delegations and several unofficial visits.

This constructive position of the United States of America reinforces the dynamics of the consecration of the Moroccan Sahara, confirmed by the positions of support by a group of friendly countries, as well as by the decisions of many countries to open consulates in our Southern Provinces.

It also comes after the decisive and effective intervention of the Royal Armed Forces in Al Guerguarat area, to maintain security and stability in this part of the Moroccan territory and to ensure the free movement of people and goods with the brotherly African countries.

During these talks, His Majesty the King and His Excellency the U.S. President exchanged views on the current situation in the Middle East region.

In this regard, His Majesty the King referred to the consistent and balanced positions of the Kingdom of Morocco on the Palestinian question, stressing that Morocco supports a solution of two states living side-by-side in peace and security and that negotiations between the Palestinian and Israeli sides remain the only way to achieve a final, lasting and comprehensive settlement of this conflict.

In his capacity as Chairman of the Al-Quds Committee of the Organisation of Islamic Cooperation, His Majesty the King underlined the need to preserve the special status of this city. The Sovereign also insisted on the respect of the freedom to practice religious rites for the followers of the three monotheistic religions, as well as the respect of the Islamic character of Al-Quds Asharif and Al-Aqsa Mosque, in accordance with the Al-Quds/Jerusalem Call signed by His Majesty the King, Commander of the Faithful, and His Holiness Pope Francis, during his visit to Rabat on March 30, 2019.

In view of the historic role that Morocco has always played in bringing the peoples of the region closer together and in promoting peace and stability in the Middle East, and given the special ties that unite the Jewish community of Moroccan origin, including in Israel, to the person of His Majesty the King, the Sovereign informed the U.S. President that Morocco intends :

– To grant authorizations for direct flights for the transportation of members of the Moroccan Jewish community and Israeli tourists to and from Morocco;

– Resume official contacts with counterparts and diplomatic relations as soon as possible;

– Promote innovative relations in the economic and technological fields, including working to reopen liaison offices in both countries, as was the case previously and for several years until 2002.

His Majesty the King stressed that these measures affect in no way Morocco’s permanent and sustained commitment to the just Palestinian cause and its determination to continue to contribute effectively and constructively to a just and lasting peace in the Middle East.

Then, His Majesty the King and the U.S. President discussed the efforts to resolve the crisis at the level of the Gulf Cooperation Council.

In this regard, His Majesty the King expressed the hope that the positive developments recorded so far will lead to the achievement of the desired reconciliation.