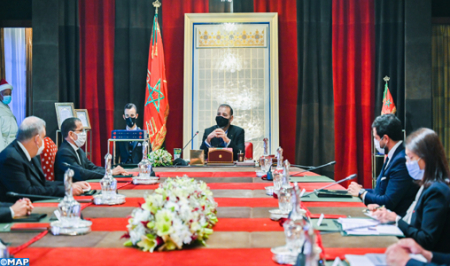 “As part of the monitoring of major projects and strategic projects, His Majesty King Mohammed VI, accompanied by HRH Crown Prince Moulay El Hassan, today chaired at the Royal Palace in Rabat, a working session dedicated to the renewable energies strategy.

This working session is part of the regular monitoring by the Sovereign of this issue.

During this meeting, the Sovereign noted several delays in the execution of this vast project and drew attention to the need to complete this strategic project on time and under the best conditions, by acting with the required rigor.

The development of renewable energies occupies, in the current context, a central role in the evolution of the global economy and the energy transition, which confirms the correctness of the strategic choices made by the Kingdom, under the Royal High Impulse, aiming to give these energies a major place in the national energy mix and to devote the pioneering and recognized role that Morocco occupies today in this future-oriented sector.

This meeting was attended by the Head of Government, Mr. Saad Dine El Otmani, the Advisors of HM the King, MM. Fouad Ali El Himma and Yassir Zenagui, Minister of the Interior, Mr. Abdelouafi Laftit, Minister of Economy, Finance and Administration Reform, Mr. Mohamed Benchaaboun, Minister of Energy, Mining and the Environment, Mr. Aziz Rebbah, the Director General of the National Office of Hydrocarbons and Mining, Ms. Amina Benkhadra, the President of the Executive Board of the Moroccan Agency for Sustainable Energy (MASEN), Mr. Mustapha Bakkoury, and the Director General of the National Office of Electricity and Drinking Water, Mr. Abderrahim El Hafidi.”